I am over the moon with excitement!  Why?  Take a look at the left sidebar.  My first time on the Pinspsired challenge and I am a runner up.  Who would have thought!  Can I hear a woot, woot!  If you want a peek, my card is here.

I am also excited because II reconnected with my old friend, Carolyn, last week.  We were neighbors and best friends for a long time until I divorced and moved away.  We were both heavily into crafting and even did shows together back then.  While we were apart, we both drifted into paper crafting (I should have known lol) and we had a lot to share when we had lunch.

One thing she shared was the fact that she bought out a scrapbook store that was going out of business. She really was looking for card racks to display the cards she sells and ended up with what was left of the store. And that was a LOT.  Here are a few pictures of what she has now, even though she has had several yard sales and donated a bunch to the local library. 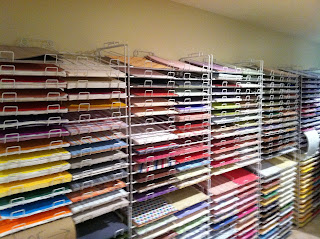 Is that an overload of paper or what?  It's all down the hall and keeps going.. . . 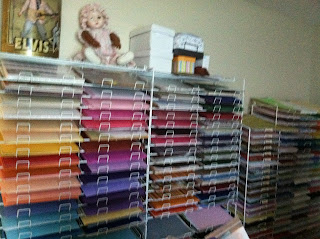 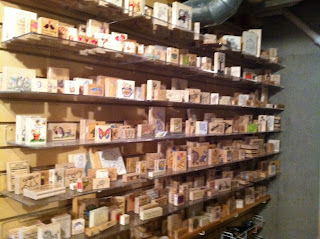 Here's a wall of stamps.  Not all of these came from the store but the slat wall behind them did.  Below the stamps are several shelves of punches, also not from the store.  And then. . . 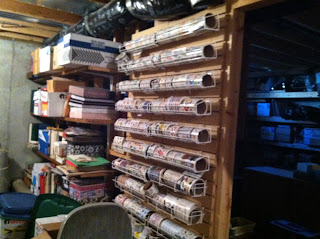 there is a wall full of stickers on rolls, and more in boxes. Overwhelming, right?  But lucky, too, I think.  It's also lucky for me that she plans a monthly cardmaking/scrapbooking get together so I finally have a crafting buddy.  Color me ecstatic!

Now on to the reason you are here - my card for the day.  This one is for CAS(E) This Sketch. 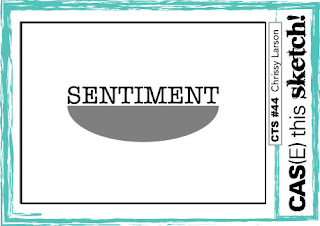 It took me a while to come up with something for this.  I must confess I went through a number of Cricut manuals looking for an image.  And I found one!!! 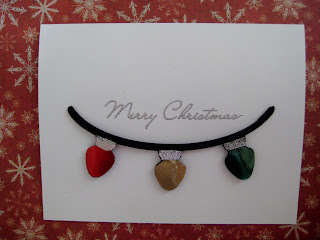 This little string of Christmas lights was in Create a Critter.  I cut the string twice out of black and the bulbs out of foil paper.  I trimmed the bulbs off one string and silver embossed the bulb caps.  After gluing the bulbs on, I added the second string to give it more stability and cover the bulb top.  I silver embossed a sentiment from My Craft Spot's Winter Wonderland.  Here is a close-up of the shiny bulbs. 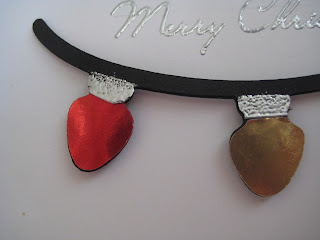 I must say it was very hard to photograph this card.  The first picture I took, the bulbs came out black.  Then when the bulbs would shine, the sentiment wouldn't show up.  It's still rather dark but the best of what I got.

Thanks for stopping by.  I hope your day is all you want it to be and more.